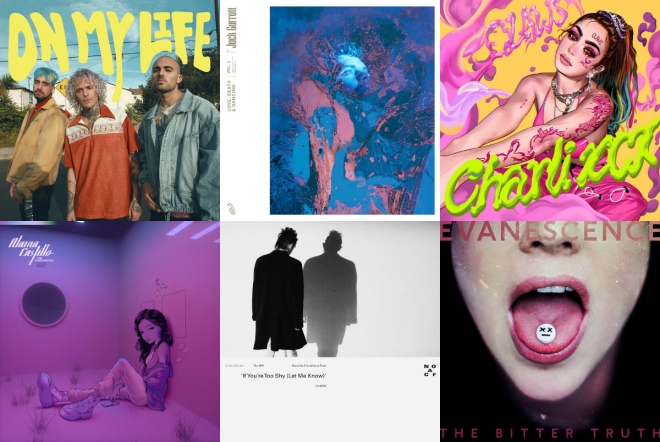 I didn’t watch that One World: Together At Home thing save for a couple of performances that were on my YouTube homepage and they were… absolutely fine. The cover of Foo Fighters Times Like These featuring ’23 of the biggest names in music’ was (if you shut your eyes) like a fun round of a pub quiz trying to figure out whose all in it, I got at least 13, but as something you’ll listen to over and over it sits the same as one of those all-the-X-Factor-Finalists charity singles.

This week, there are at least two top-tier end-of-year placers. A truly exciting week for new songs, and so I made some brutal cuts to get down to 11, but these 11 are all excellent and, given the correct attention and atmosphere, deserve at least 37 minutes of your time. Check em out below.

Click here for the Spotify playlist if you’re not a fan of reading.

I’m still on the fence about Matt Healy and co, on the basis that they seem like an annoying bunch of wankers and the songs they’ve put out for the upcoming album have been palatable at best, but on their past merits it is always worth persevering with them as a band because eventually if you are patient they give you songs as undeniable as If You’re Too Shy (Let Me Know). There’s a lot to love about it: the soft open, the thrumming bass, the signature 1975 phrasing in lines like “I see her online/all the time”, the whispering background vocals, the scattershot galaxy of synth sounds, a chorus you can get your lungs around, and a saxophone section that would make Bruce Springsteen weep. I must have just run a marathon because my endorphins are at 1000 and I am b r e a t h l e s s.

Alaina Castillo – pass you by

There’s a really nice cover of Elvis Presley’s Can’t Help Falling In Love by Haley Reinhart which this from Castillo brings to mind. The soft guitar line is really sweet and evokes that ‘sit-by-the-window-waiting-for-the-rain-to-subside’ feel, and Castillo’s voice has quiet control that will really pull you into her mindset so that the four-minute runtime doesn’t feel overlong. The chorus isn’t huge, but it sits just right, particularly the line “One day your heart might lose its mind” which is just poetic-sounding enough to leave you fully convinced that you really need to start living in the moment.

I like exactly three Charli XCX songs: Boys, the Lizzo-featuring Blame It On Your Love and now the glorious mess that is claws. The sheer number of rhymes and half rhymes she crams into the verses is painful, the synthetic noises injected at every available second will give you a headache, and the final thirty seconds are a rocket shooting through space at lightspeed which crashes into a deafening static that will make you rethink your entire existence. A real lockdown-inspired musical-madness experience worth having, if you can bring yourself to endure it.

Cheat Codes – On My Life

I had to look up the origin of ‘This Little Light of Mine’ – unsurprisingly, it’s the bible – because I wonder to what extent you can use a sample line without crediting it. On My Life turns the phrase on its head a little and rather than being a symbol of hope and self-worth it’s a symbol of… visible financial gain. Superficial intent aside, it’s a pretty reliable EDM affair from Cheat Codes, whose chorus is remnant of their own No Promises. It’s catchy, it sounds good, what more can you ask for? Plus now that I know that an EDM version of Hark The Herald is within reach, I have yet another reason to live.

I’m glad that the world finally caught up with Cher Lloyd, who has been ahead of her time for a decade now. Lost sounds like something that would have fitted perfectly on her debut album and feels completely natural in the 2020 soundscape: a intelligently-pop-leaning trap-pop song, with some simple-but-satisfying wordplay (‘you think I’d be lost without you // I got lots without you’), a post-chorus that will have you sweating, and a vocal that is undeniably hers, which can’t be said for a lot of girls in pop. Get ready for the second coming.

Evanescence – Wasted On You

There’s something comfortingly familiar about this alt-rock song that sounds a bit like Radiohead’s Creep and its made-in-lockdown video from a band who haven’t released any new music of note in nearly a decade. The build of the bridge awoke something in me I thought was long dead and the key change in the final stretch is breathtaking. Is 25 too late to go through an emo phase?

There is a very specific sub-genre of pop which I am sure has an official technical name but I’m going to call it rain-pop, because of that gentle, warm, everything-will-be-ok feeling songs such as Begging for Rain evoke. See also: Tones and I’s Never Seen The Rain and Robinson’s Nothing To Regret.

I really thought that Jack Garratt had ended my search for musical perfection with the 32-second shot of ambrosia that is 4.46-5.18 from his recent single Time which I’ve been taking regular hits of to remind me that life is good, and yet here again he has bettered himself, and everyone else, with Better. The sampling opener of this iconic vine, to which I have some personal attachments, floored me from the off, but it is in the chorus, which carries the gravitas, built up over the course of two-and-a-half-minutes by most songs’, final chorus on its first outing and pumps you full of jubilant rhapsody which is its biggest strength. There rich, raw vocals in the verses, some fresh-feeling melodic choices, some seamless gear changes, and a final 12 seconds that serve as Garratt’s goofy signature.  I do not know a Better song.

mxmtoon is known for her light indiepop song and no faker, a delightfully twee ukulele tune, gives power back to the woman in what would have been, if this song were released 15 years ago, the pinnacle of manic-pixie-dream-girl pop.

With a opening line that goes “Wide awake/Just cut the head off of a snake/Wanted venom, got a taste,” and a series of boiiiing sounds, you know PVRIS are going to deliver something huge. If you give them that minute they beg for, you will recieve some excellent glimmers of raw vocal power and a final thirty seconds that will fill you with as much adrenaline as a swarm of vipers nipping at your heels.

Reevah – You Said, Tell Me

This Gabrielle-Aplin sounding folk-pop song contains my favourite lyric this week which is: “you tell me I wear black all the time/well this me just mourning my own life”. Inspired.