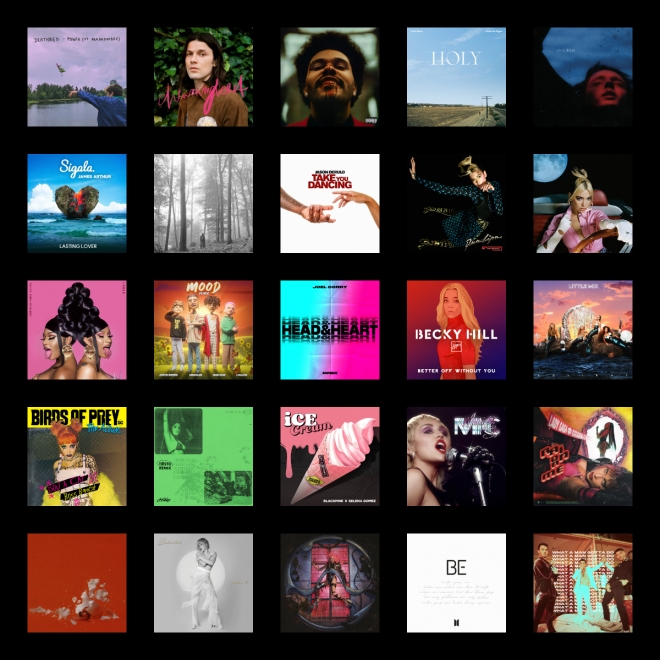 Last year in trying to nail down some semblance of top however-many songs of the year made me realise that, at the rate of singles I consume for this blog, that’s basically impossible.

So, now in the second year of a newly started tradition, here are the Top 40 tracks from this year that you probably heard. We’re talking the radio hits, the streaming giants, the big-name releases. Chances are you maybe didn’t hear a lot of these, but if you are listener of commercially-targeted music, then there is a more than reasonable chance that you did.

For the songs you are statistically less likely to have heard, there’s a sister list of the Top 60 songs you might have missed this year that can be found elsewhere on the website in the next couple of days.

This song is definitively bad, but there’s something truly fascinating about the decision for two pop stalwarts to come together on a song which is, essentially a faux-inspirational warm-up song with a Disney movie chorus.

I’d rather not use my precious earth minutes listening to Ava Max, but way she samples the melody of Bonnie Tyler’s If You Were A Woman (And I Was A Man) is just maddeningly good.

38. Be Happy by Dixie D’Amelio

You may not be familiar with TikTok’s biggest name, but unfortunately I am – and her life must be hard because she put out the annoyingly catchy Be Happy to cheer pick herself up.

37. Level of Concern by Twenty One Pilots

We’d probably all like to forget that this whole waste of a year happened, but if there’s one thing I’ll be putting in the 2020 time capsule for future historians, it is this halfway decent Twenty One Pilots song which is an anxiety-driven bop.

Whether or not you sat through both of Taylor Swifts new album (or, if you are like me, that Disney+ documentary) you probably at least clicked play on folklore meaning you almost definitely heard the 1: the perfect idyllic love song that is up there with some of her best work.

Look, I can’t get on board with another shouty white man, I just can’t, but this song is pure gut-thumping adrenaline.

Nothing but respect for Niall Horan and this, the spiritual successor to Slow Hands.

Easy hooks, summer vibes, no aggressive jazz moments, and on a par with The Wire – a real winner from HAIM.

32. Break My Heart by Dua Lipa

You don’t need me to tell you that 2020 was Dua Lipa’s year. Break My Heart was just one of many great moments of escapist bliss that gave us a perfectly executed take on a familiar hook.

If I don’t have to feel shame for liking the music that Joe Jonas created under DNCE, then I won’t be feeling it for liking this too.

Can’t tell if this is good or if I just fancy Shawn Mendes as he flails around a jungle in a white vest.

Hard to put into words what the opening bars on Confetti do to you really, isn’t it?

They may be incredibly fucking annoying, but If You’re Too Shy is one of the year’s biggest anthems.

Still getting that ‘I’m sour candy/So sweet, then I get a little angry, yeah’ bit stuck in my head about once per week.

Yeah, she had Say So, but that wasn’t a patch on this: a nought-to-100 anthem taken from the OST from everyone’s favourite movie of the year, Birds of Prey.

The biggest crime against music to occur this year is, like it or not, still a fucking banger.

22. Therefore I Am by Billie Eilish

The spiritual successor to All The Good Girls Go To Hell with better lyrics, particularly the way she says ‘what the hell are you talking about? get my pretty name out of your mouth’. Shakespeare could never.

Clearly looking for some redemption after yummy, JB gave us this awful-but-uplifting slice of soul-pop with a perfect guest spot from sweet baby Chance.

I know this is coming out on top of a lot of EOTY lists, and rightfully because it is lyrically audacity really does hit different, and I know this is partly the point of it all, but I will never quite get over gobblemeswallowmedripdownthesideofme.

Can’t believe I’m supposed to take a songs about a cardigan seriously as a lead single from a Taylor Swift album, but here we are. A beautiful slow burner.

Pocket full of honey and I’m ready to go is how I’ll be entering 2021. An unstoppable banger.

Not sure who is still checking for the everyman, Mr Let It Go himself, but I am apparently, and he’s still serving up some very-singable pop-rock hooks.

16. death bed (coffee for your head) by Pofu + beabadoobee

The perfect musical depiction of 2020.

15. In Your Eyes by The Weeknd

There’s a reason that The Weeknd spent much of 2020 being the world’s most streamed artist, and In Your Eyes is testament to it.

I can’t explain it, but I’ve never felt as comfortable in my sexuality as I feel when I listen to this song?

There are so many musical layers fighting for attention here and to this that you could spend hours listening to it and find something new and perfect. One of CRJ’s best ever.

Never has a lyric been so perfectly delivered as ‘like an echo in the forest’.

11. Rain On Me (with Ariana Grande) by Lady Gaga

Once I was out running and the ‘I’d rather be drunk but at least I’m alive’ line landed and it literally started raining and that was the moment that I knew that god was real, and her name is Stefani Joanne Angelina Germanotta.

The whispered chorus on Holiday is the best thing Little Mix have ever done, period.

Tai Chi practicing, snowboard champion, she can fix the flat on your car – Miley Cyrus might even be a rock star. Thank you Stevie Knicks for not only allowing use of the sample, but also for the Edge of Seventeen remix. Perfect.

They really couldn’t stop talking about Bon Iver being on folklore and when you experience what he does with the bridge here, it’s easy to see why. Transcendent.

06. Better Off Without You (with Shift K3Y) by Becky Hill

Rip roaring euphoria from one of the banger-maker in the business.

It’s easy to see why a song with a hook as relentless as Mood was propelled to number one by a TikTok trend.

04. What A Man Gotta Do by Jonas Brothers

I mean, I just really love the Jonas Brothers, and feel particularly blessed that I got to hear this cute upbeat behemoth live before the pandemic revoked our concert privileges.

03. Take You Dancing by Jason Derulo

There’s something particularly evocative about what Jason Derulo so consistently does, and he’s gone and done it again on Take You Dancing.

02. You should be sad – Tiesto Remix by Halsey

The original version of You Should Be Sad was incredible, but Tiesto really gave an extra lift to a song that was already sky-scraping.

Still trying to work out why the scientists spent so much time trying to create a vaccine when this, the cure to all of life’s maladies, could have been injected directly into our veins.

3 thoughts on “Songs of the Year: Top 40 tracks you probably heard”