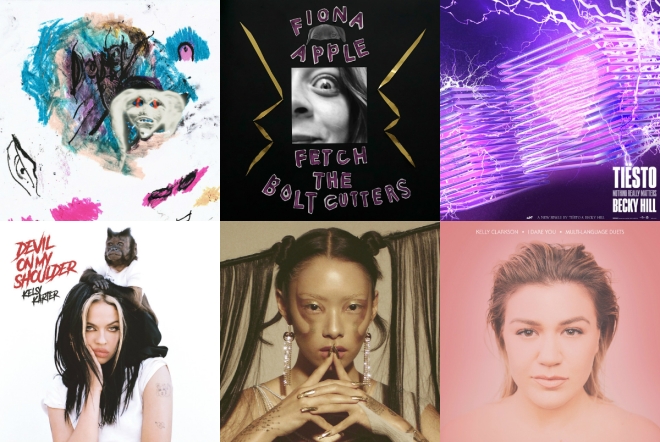 Look, I know that in this world with its endless cycle of music and art it feels important to stay relevant and remind fans you’re still kicking about, but I genuinely worry for the  that the big name artists that can’t just take a couple of months off and work on something or reset themselves rather than ‘entertaining us’ and ‘keeping up morale’ with these #inthistogether at-home concerts. We’re all bored, we get it, but let’s just not? At least some people are using this time productively to continue the much-needed churn of new music that is this writer’s lifeblood.

Re: last week, I’ve now had a proper listen to all the songs I tentatively recommended and the ones from Kiesza and the Sophie-and-the-Giants-featuring Purple Disco Machine are both 10/10. I’ve also been listening to this cover of I Think We’re Alone Now by Billy Joe Armstrong of Greenday fame (one of the few ‘at home’ performances I will concede to), but because this is not a ‘new’ song then it doesn’t make the official list.

There was a fair heft of new music this week, and I’ve still not taken the time to listen to everything I’d like to have in full, namely the Rina Sawayama album and the Fiona Apple album, but here are 12 of the best new songs from the most recent batch of releases.

The lyrics in this are problematic: “She really loved me and she really gave it to me/She took care of me and she let me hit her/I don’t know how I fell into this opportunity/To stay alive I had to do what I was doing” so hopefully this soft, tender, acoustic ballad in which Benja sounds divine, is just a bit of storytelling.

Seabra is a 25-year-old TikTok starter with an understated voice which sounds a bit like the guy from A Great Big World. There’s nothing profound to say, it’s just a lovely piano ballad. If you like this, listen to this one too.

Balcony  – He Don’t Trust Me

Good opening melody, good humming vocal layers a-la Imogen Heap’s Hide and Seek, it’s a little basic and little bit chainsmokers-y if we’re honest, but if we are honest we do like both of those things in careful moderation.

As this is my first proper exposure to Fiona Apple, I am not the correct person to understand or explain why she and her new album are excellent, partly because I haven’t listened to it in full yet and partly because I’m a clueless fraud masquerading as a music journalist, so you can do a quick google search if you want to locate the insightful critique. All I can offer you is my surface, pedestrian level appreciation of Shameika: it is a bizarre, theatrical, well made cacophony of musical excellence, and, as someone on twitter pointed out, you can really hear the genuine joy she has in singing every single line.

Kelly Clarkson – I Dare You

On the scale of Kelly Clarkson bangers which ranges from 8-17, this comes in at an 11 – a banger, not as big as her biggest, but still pretty huge. Don’t mind if I do.

Kelsy Karter – Devil On My Shoulder

It is truly a relief to be gifted some high energy, euphoric pop punk. The thing that makes this extra good: the Aussie-accented talk-singing in the verses.

Dorky and fun. [other comments were deleted because they were unnecessarily negative]

If this and her past singles are anything to go by, Sawayama’s new album, which I will be listening to in full tomorrow, is a perfected culmination of all the best elements of pop music that have we have seen over the past decade. Triumphant.

I sort of hate this, which more than likely means it’ll be in my top 10 songs of 2020 come December 31st. The swing between the intense Taylor-Swift-Ready-For-It verses and the animated Disney film chorus is baffling. Equal parts messy and hugely exciting.

Do we want an enormous banging new tune from Becky Hill and Tiësto? Abso-fucking-lutely we do.